What are different Layers in Blockchains ?

What are different Layers in Blockchains ? 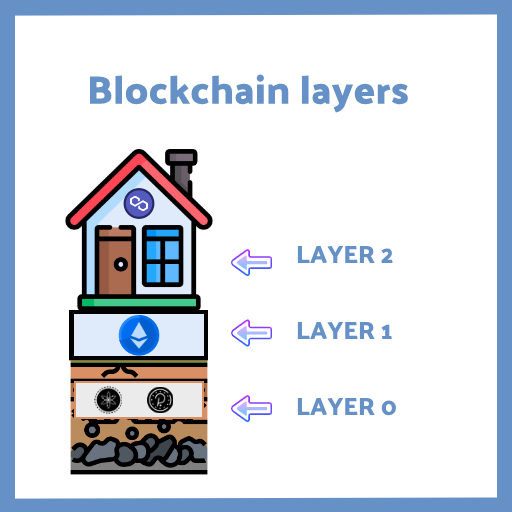 You probably heard about different layers in Blockchains, but you are unsure about what it is. In this article, i will try to explain it as simple as i can, to make it easy to understand.

To understand what are different layers of Blockchains, you could imagine a neighbourhood, being the whole crypto ecosystem. The ground connecting each house is the layer 0. Each house is a layer 1 Blockchain. Then, a layer 2 Blockchain could be a part of each house, like the fireplace, or a window.

This is a simplistic representation of how it works, but it will help you understand the basics. The reality is a much more complex system, that is only dedicated more advanced engineers and tech people of this field.

Let’s dive into details to elaborate this approach.

As said in the introduction, the layer 0 represents the tunnels in ground underneath any Blockchain. This is the world where they all could meet, and communicate.

To maker it easier to understand, here is a picture that represent the whole Blockchain ecosystem.

The layer 0 is underneath any layer 1 Blockchain. As you can see, Cosmos and Polkadot are two of many layer 0 Blockchains.

However, unlike this picture shows, a layer 0 Blockchain is not mandatory for a layer 1 to exist. We just need to imagine the ground being the connexion between different layers 1.

When Bitcoin (layer 1), the first ever Blockchain created, there was no layer 0 underneath it.

What is the purpose of a layer 0 Blockchain

Making developper’s work compatible : If a Dapp is developped on one blockchain, it is compatible automatically on other blockchains, as long as they’re built using the same layer 0.

Example : A developper coding multiple Dapps for Bitcoin, Ethereum or Solana, using Cosmos layer 0. These Dapps can interact with each other thanks to Cosmos.

Before layer 0 interoperability, everything that was developped on one Blockchain was stuck on it, with the incapacity to move or interact with another blockchain. Cosmos for example is using tendermint, their platform for blockchain development which is open source. It allows developpers to build on it, using various offered tools.

Developers don’t need to start from scratch and build their blockchains from the ground up. Many features are pre-built and easy to use.

Because of this interoperability, the cross-transfers and exchanges are faster, and cheaper. They don’t need to use bridges, that are to this day less secure and stable. A lot of recents blockchains hacks occured on bridges between blockchains because it is a weakness.

Layer 0 is a part of a solution providing a fast and secure way to communicate between the layer 0 Blockchains.

The result is faster, safer and cheaper transactions on cross-chain exchanges.

Here is a list of the most important Layer 0 Blockchain to this day :

What is a layer 1 Blockchain

As showed on the picture, the layer 1 is a whole independant project. It has its own Blockchain infrastructure, token format, and consensus mechanism.

Definiton of a layer 1 blockchain

Layer 1 blockchain is typically composed of a distributed ledger (or blockchain) and a consensus mechanism. The most important are Proof of work (POW), and Proof of stake (POS).

The distributed ledger is the backbone of the blockchain and is responsible for storing information about all transactions that take place on the network.

The ledger is maintained and verified by a network of computers (known as nodes) that work together to keep the ledger up to date. Each node is responsible for verifying the transactions that take place on the network, ensuring that all information is accurate and up to date.

The consensus mechanism is the process by which the nodes on the network agree on the validity of a transaction. This is done using a variety of algorithms, such as Proof of Work (POW) and Proof of Stake (POS). These algorithms are designed to ensure that the network reaches consensus on the validity of a transaction before it is added to the distributed ledger.

It can be build on a Layer 0, but it can also be independant. Ethereum for example, created its own Blockchain network, this its own token (Eth token) and token standard (ERC20). They now use the Proof of Stake consensus to validate transaction on its network.

The token standard is important because it implies that other coins are most of the time not compatible. For example, if you send bitcoins to an ERC20 wallet, you will loose all your funds.

On this Blockchain, some smart contracts are developped, with its own coding language (solidity).

A layer 2 network is a project built on a layer 1 Blockchain, in order to improve one of the key factors: scalability.

You may already have heard about the trilemma of Blockchains :

Vitalik Butterin (One of Ethereum founders) popularized this term a few years ago by saying that this is the 3 key factor to evaluate a Blockchain performance.

Scability is a key factor of performance because it allows a project to consistently grow without being perturbed by transfer slow-downs, or high transactions fees.

Most of the layer 1 Blockchains didn’t anticipate such a massive success of their blockchains. Consequently, they quickly became overloaded.

Ethereum is the perfect example of a congested network, which has a poor scalability capacity on its own. In 2021, one of the last peak of its existence, the network was so congested that you might have to pay more than 50 $ in gas fees (transaction fees) for a transaction in order to be executed.

That’s what forced layers 2 solutions to be implemented.

What is the purpose of layer 2 projects

Layer 2 networks are an extension of the original blockchain architecture. They are designed to improve scalability, by improving speed, privacy, and transactions cost. Layer 2 blockchains use a second layer of technology on top of the existing blockchain protocol.

A layer 2 protocol is built on a layer 1, and can’t exist on its own. It’s like if you want to build a window or a fireplace at home but you did not build the house yet.

Layer 2 blockchains use off-chain technology to process transactions. This means that transactions are processed outside the main blockchain network. This allows for much higher transaction speeds than traditional blockchains. However, transactions still need to be validated by the underlying blockchain before they can be added to the chain.

This is done through the use of smart contracts. Layer 2 blockchains could also offer increased privacy. Transactions conducted on a layer 2 blockchain could be invisible to the public. This means that users can make transactions with complete anonymity.

They offer increased scalability, speed, privacy, and efficiency over the traditional blockchain model. It remains to be seen just how far layer 2 blockchains will take us, but one thing is certain – they are an important part of the future of blockchain technology.

example : In a restaurant (layer 1), you pay someone to take care of all the invoices and pay slips (an accountant : layer 2), while he can benefit from the building above his head and an office to accomplish its task.

On Ethereum (layer 1) for example, Polygon network(layer 2), will take care of many transaction in order to decongestionate the main Eth network, while using Ethereum infrastructure, and security. Consequently, the network is faster and cheaper.

All layers are important in Blockchain projects

Even though each layer has a different structure, they are all co-dependent in order to work flawlessly. The cooperation of all layers project could respect the Blockchain trilemma and develop each one of its root proportionally.

We mentionned in this article layer 0,1 and 2, but there is more than that. Layers 3 and more are being developped, but the most important part is about the first 3 layers.

Imagine the next layers like some very specific task execution on each Blockchain. It could still be a scalability solution, or more specific tasks. To this day there a few projects, such as StarkNet.

The general purpose of StarkNet networks is to simply take advantage of fractal scalability in order to decongest Ethereum network.

What is DCA in crypto investment ?

How to create a trading bot without coding : Coinrule

No comments to show.